What Are Our Students Up To?

Our students are actively involved in and around campus, in the city of Columbus, in Ohio, across the nation, and around the world. 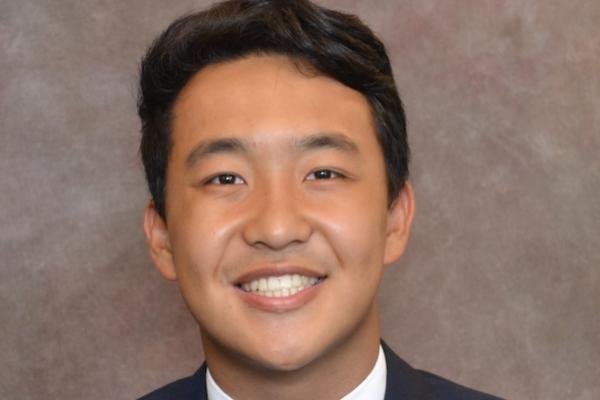 The Department of Political Science is proud to announce that the Ohio State University senior Henry Wu has been named a 2020 Rhodes Scholar. The Rhodes Scholarship was founded in 1902, and supports graduate study at the University of Oxford in the United Kingdom. Thirty-two scholarships are awarded annually to outstanding seniors and recent graduates across the United States. The Rhodes Trust selected Henry for his commitment to fighting human trafficking and researching migration patterns and policies impacting the involuntary movement of peoples.

As a university honors student, Eminence Fellow, and recipient of the Jeanne Bonnet McCoy Preeminent Scholarship, Wu is pursuing a double major in philosophy and political science. Wu has achieved a stellar academic record as he has studied the legal and social contexts of migration and philosophical notions of freedom and slavery.

During his first year at Ohio State, Wu heard from nonprofit professionals about the issue of human trafficking, a modern-day form of slavery happening just miles away from the Ohio State campus. "I am extremely fortunate that I was not forcibly separated from my parents when we immigrated to the United States," says Wu, whose family emigrated from China. "I now understand how restrictive immigration policies can put migrants at greater risk of exploitation and trafficking in the United States," Wu continues, "[and] I will fight for a world where the dignity of the most vulnerable is protected just as my own."

As part of the Eminence Fellows program, Wu co-founded Enlighten, which mobilizes students to confront human trafficking and create a culture of compassion through on-campus awareness and direct community engagement. Wu has also established connections with anti-trafficking student leaders at Boston College, Penn State University, SUNY Albany, and Emory University. Recently, Wu created a partnership with the Ohio State Moritz College of Law to provide mentorship events for minors who have been trafficked, including a trauma-informed self-defense course at a local Brazilian Jiu-Jitsu academy to help them gain self-confidence. While Enlighten grew from his Eminence cohort's service project, Wu has pursued high-level internships at various NGOs such as Free the Slaves and The Human Trafficking Legal Center. Additionally, Wu volunteers at the Legal Aid Society of Columbus, where he helps survivors of human trafficking overcome criminal record-based barriers.

As a Rhodes Scholar, Wu plans to pursue Master of Science (MSc) degrees in migration studies and evidence-based social intervention and policy evaluation. This multidisciplinary course of study will enable Wu to examine the ways in which policy choices, including immigration policies, can limit or expand freedom. After earning these degrees at Oxford, Wu will return to the United States to attend law school so that he may develop the practical skills necessary for a career in international law and policy. As a Rhodes Scholar, Wu will utilize his experiences studying in the U.K. to justify multilateral responses to human trafficking. 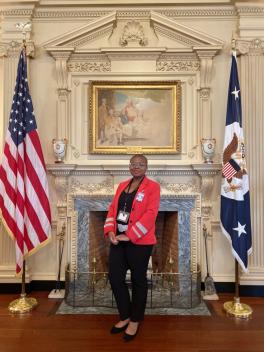 Second year Ose Arheghan was one of twenty-seven college-aged participants in the Cox State Department Seminar held October 2-5, 2019 by the State Department and the Una Chapman Cox Foundation. Their application was selected from over 600 applicants nationwide.

Seminar participants were hosted by retired US ambassadors and members of the foundation, and were taught about inner workings of diplomacy. They met with a variety of persons, from current foreign service officers to Rangall-Pickering Fellows, to those working on the civil side of international affairs. "They were doing exactly what I want to do in the future," Ose said of getting to speak with foreign service officers working all over the world. Ose would like to to work as a foreign service officer or for the State Department in some capacity, although their dream job would be U.S. Ambassador.  They said that participation in this seminar was a fantastic experience that gave them a great sense of direction and connection in terms of what they want their last two years of undergrad to look like.

A celebration of The Ohio State University that is 150 years in the making includes a new scholarship program designed to develop current students into future leaders.

Ohio State awarded 150 sesquicentennial scholarships to students across the university for the 2019-20 academic year and of those, and 2 students come from the Department of Political Science. Sydney Green majoring in Political Science and Alexis Oberdorf majoring in World Politics have both been honored with this award. The Sesquicentennial Student Scholar Leadership Program is one part of the university’s sesquicentennial celebration and demonstrates a commitment to increasing access and affordability while recognizing students’ academic and non-academic accomplishments and diverse interests.

“The Ohio State University has transformed lives for nearly a century and a half. I look forward to celebrating this historic occasion with members of our new scholarship program and the rest of the Buckeye community,” said President Michael V. Drake. “These student leaders will help lay the foundation for the next 150 years of excellence and impact.”

Scholars receive $2,500 for the first year of the program, and the scholarships are renewable for up to six additional semesters or completion of their current degree program, whichever comes first. Scholarship recipients represent all campuses, colleges and undergraduate, graduate and professional student populations. Beyond financial support, sesquicentennial scholars will receive leadership training and professional development support, and serve as sesquicentennial ambassadors at programs and events. The scholars program, and the learning opportunities that go with it, support the charge and motto of Ohio State.

Last spring, The Ohio State University Mock Trial Team competed in the 2019 AMTA National Championship Tournament in Philadelphia where both the A and B Teams placed fifth in the nation in their respective divisions. The result was the highest finish in the program's history. Furthermore, two students were honored with All-American awards. Political science major Julia Cash received the Outstanding Witness Award, while Mahmud Bari, a political science and history major, was named Outstanding Attorney.

Congratulations to all the students and coaches of the Ohio State Mock Trial team on this impressive achievement!